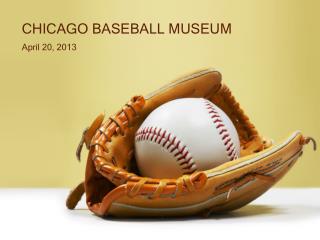 CHICAGO BASEBALL MUSEUM. April 20, 2013. Introduction. Welcome to Whiting As Mayor, I confident that a partnership between the CBM and the City of Whiting will be mutually beneficial After seeing our City and our future plans, hopefully you’ll also agree. Background Information. display at the Chicago Field Museum of Natural History

Baseball - . blood and immunity pick your line-up and create your team name!. what is the scientific name for a white

Baseball - By: marcus engh. baseball. i played it a good part of my life it’s a hard sport to play it’s fun to play.

Baseball - . b. ms. shaw played for the comets, the c hicago bandits, and michigan wolverines. she traveled in the u.s.

Baseball - . how many players/referees has it got?. the number of players on a baseball team 25 on the team 9 on the

Baseball - . by robert morris. what position is played from the top of a mound?. field positions for 100. pitcher. what

Baseball - . grant kauvar. what is baseball?. baseball is a sport in which a ball and bat is used. there are two teams in

Baseball - . mitt. bat and ball. baseball field. second base. first base. third base. home plate. big players in the