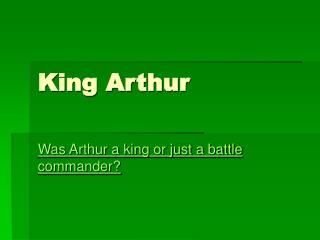 King Arthur. Was Arthur a king or just a battle commander?. Arthur the Battle Commander. There are Roman historical references to Arthur the warrior Historia Brittonum, written by the monk Nennius in the 9th century tells us of 12 great battles Arthur fought. Conceived in battle. KING ARTHUR - . the legend &amp; history. the legend – who ?.  the name of king arthur - no appear ance in the

King Arthur - . the once and future king. true story?. arthur (top centre ) in an illustration to the middle english poem

King Arthur - . history and legend. king arthur in the movies. what movies can you name that are about king arthur? what

King Arthur - . legendary british leader, who led the defence against the saxons. arthur’s historical existance is