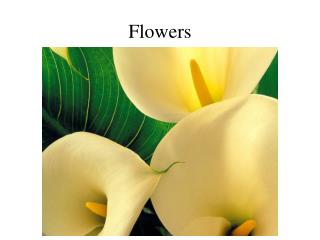 flowers - . what are flowers?. flowers are the specialized plant structures which produce pollen and where seeds develop

FLOWERS - . by: sophia koosha. pettles. pettles are the outside of a flower. where they grow. flowers can grow any place

flowers - Each and every occasion like anniversaries, birthdays, achievements and any other occasions are very precious.

Flowers - . their main jobs for the plant are: develop into seeds &amp; fruits = sexual reproduction reproduce the