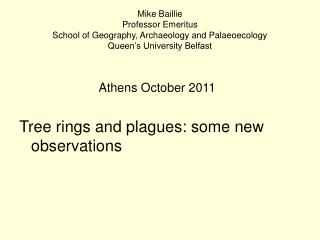 What’s New in PowerPoint 2011 - . the new ribbon. organized by tabs specialized tabs appear depending on the object

Rate of Change and Tree Rings - . bc calculus. image by lonnie thompson. observations?. rates of change are not all the

Tree Rings - . bilingual section ies pedro de valdivia. starter. can you, in groups of 4, find the value of pi? you have