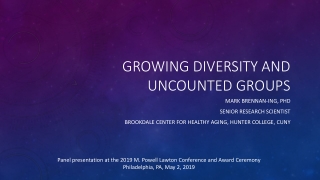 Uncounted Resources of the Louisiana Coast - . value and sustainability in an informal economy. many u nderrated cultural

GROUPS AND - . organizations. characteristics of groups. 1. definition of social group : two or more people who interact

Ethnic Groups and Religious Groups - . what is the difference?. what is culture?. culture consists of the beliefs,

Moving and Growing - . the human body . the endoskeleton. skeletons inside and out skeletal systems come in many forms.

Moving and Growing. - Moving and growing. . human endoskeleton. you cannot survive without bones. a baby child has about

Giving and Growing - . chapter 6. why do we give?. because that is what god tells us to do in the

Alive and Growing - . alive and growing. in business and in life, being in the right place can make all the difference in

Moving and growing - . this is a skeleton. human