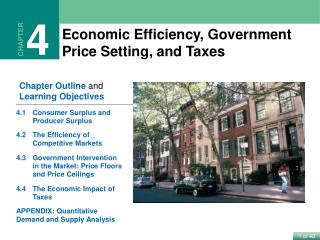 4. Economic Efficiency, Government Price Setting, and Taxes. CHAPTER. Chapter Outline and Learning Objectives. Should the Government Control Apartment Rents?. Rent control puts a legal limit on the rent that landlords can charge for an apartment. Taxes and Government - . 5.3. how does it work? government receives funds from taxes and borrowing (i.e. bonds issued)

Government and taxes - . 2012 mária adorján. taxes. to tax is to impose a financial charge or other levy upon a

Economic Efficiency and the Role of Government - . while the first lesson is worth $25 to some consumer (flo) . . .

Taxes and Government Spending - . chapter 14. what are taxes?. steff cybulski liz dillon. what is the purpose of

Taxes &amp; Government - . financial literacy. filing a tax return when does it need to be done? how do i do it? the

Economic Efficiency - . an allocation of resources is said to be efficient if it is not possible to make one or more