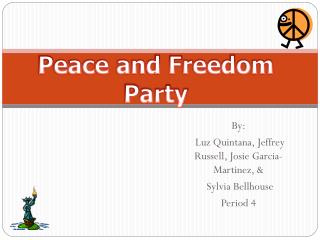 Peace and Freedom Party. By: Luz Quintana, Jeffrey Russell, Josie Garcia-Martinez, & Sylvia Bellhouse Period 4. The Symbol of the Peace & Freedom Party. The dove represents peace while the broken chains represents freedom. The Motto. We did not find their motto but did find their song. Mirror by Sylvia Plath - . who is the narrator of this poem? find a line or phrase that suggests the mirror is unaffected

BY: Jonathan Martinez - . when i first took everything apart. computer fan. this is a computer fan inside attached to the

By Josie - The box. by josie. during the half term the school dug up a mysterious box. everybody was excited, soon the

Mirror by Sylvia Plath - . isabel stasko. i am silver and exact. i have no preconceptions. whatever i see i swallow

ADVISORY PERIOD Ms. Ana Luisa martinez - . welcome to our advisory. this is a time to think a little, laugh a little, get

By: Christian McDavid Period 4 - . background of the first tee. began in connecticut in 1999 the founder is world golf

By: Cynthia Garcia - Tattoos. by: cynthia garcia . the first tattoo known to man was found on otzi , also known as the

“Initiation” by Sylvia Plath - . activating prior knowledge. copy these questions into your interactive notebook on

By, Josie Hintz - Inside a frog’s habitat. by, josie hintz. frog habitats at the innovation center. there are many