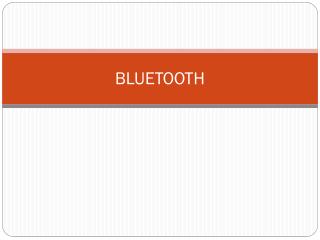 BLUETOOTH. Introduction. Bluetooth technology discussed here aims at so-called ad-hoc piconets , which are local area networks with a very limited coverage and without the need for an infrastructure. Architecture. A very important term in the context of Bluetooth is a piconet . BLUETOOTH - . a way to wireless communication. b luetooth. presented by: sourabh gupta 05it6016 mtech (it). under

Bluetooth - . presented by : harish kumar, tulasi ram . what is

Bluetooth - . an overview. introduction. what is bluetooth. bluetooth is a universal radio interface in the 2.4

Bluetooth - . by sonny leung. jennifer portillo. thomas razo. samson vuong. introduction. what is bluetooth? what does it

Bluetooth - Joe casey. bluetooth. use short-range wireless links between both mobile and stationary devices. data and