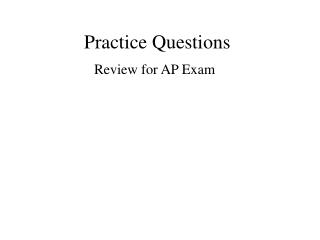 Practice Questions. Review for AP Exam. The franking privilege is best described as A request by the president for a senator’s approval of a judicial appointment The ability of the Federal Reserve Board or the Treasury to print money

Biology CST Practice Questions - . two students were testing the amount of fertilizer that would best promote the growth

EOG Practice Questions - . inherited traits. 1. which best explains why a population of cactuses in a desert all have

Pelé - “everything is practice.”. pelé. to practice is to prepare. the world history ap examination consists of 70