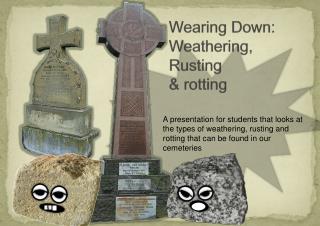 CHAPTER 10 - . weathering and soil formation. why are river rocks round?. tumbling in running water. what is weathering?.

Goal 9 - . flappers. young women who embraced the new fasions and urban attitude of the day. they rebelled against the

Mechanical (physical) Weathering - . the process of breaking down sediment without changing the rocks chemical

Weathering and Erosion - . what is weathering?. weathering is process of breaking down and changing of rock at or near

Sediments of the Ocean - . chapter 5. are particles of organic or inorganic matter that accumulates in a loose

Weathering and Soil Resources - . nancy a. van wagoner. acadia university. introduction why should i care?. soil is a