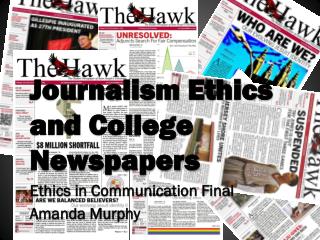 Journalism Ethics and College Newspapers Ethics in Communication Final Amanda Murphy. Last fall Pennsylvania State University dealt with the Sandusky scandal. . But the mainstream media weren’t the only ones covering the story.

Ethics in Journalism - . 4 major dilemmas journalists (tv, print, bloggers, radio) face. whether to be honest how to be

Ethics in Journalism - . our agenda. to understand what it means to “minimize harm” to acknowledge the importance of

Ethics in Journalism - . intro to tv production mrs. pettus. what are ethics?. aka- moral philosophy right vs. wrong

ETHICS IN JOURNALISM - . society of professional journalists. how can this site help a beginning journalist today? ethics

Journalism and Ethics - . today: lecture, scenarios, film. journalist code. the central purpose of journalism is to

Ethics and Journalism - . november 10, 2008. election night coverage. what did you watch/read view? who did the best?

Ethics of Journalism - . journalism. journalism is the craft of conveying news , descriptive material and comment via a

Ethics of Journalism - . by michael flax. society of professional

Ethics in Communication - . what is “ethics”?. our sense of what is right or wrong. why should we learn about ethics

Communication Ethics - . i think that failures in ethics and integrity here are less excusable than errors in