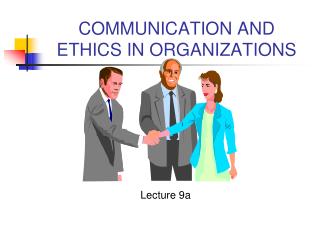 COMMUNICATION AND ETHICS IN ORGANIZATIONS COMMUNICATION AND ETHICS IN ORGANIZATIONS. Lecture 9a. Decision-Making and Ethics. Ethics: “a practice … by which we may reach conclusions concerning the rightness or wrongness of voluntary acts related to our [goal] last end” (AR)

COMMUNICATION AND ETHICS IN ORGANIZATIONS

What is Ethics? Ethical Behavior? - . view the following! are the behaviors unethical? what makes them unethical? http://

Chapter 1 Effective and Ethical Communication at Work - . topics in this chapter. why you need to build career skills.

Business Communication Ethics - . includes material from guffey text ch 1. what would you do?. you are driving along in

Chapter 1 Effective and Ethical Communication at Work - . topics in this chapter. why you need to build career skills.

Management Communication About Ethics - . the difficulties of managing for ethics. compliance with laws. ethical

Chapter 3 Ethics and Behavior in Organizations - . learning goals. define ethical and unethical behavior discuss why some