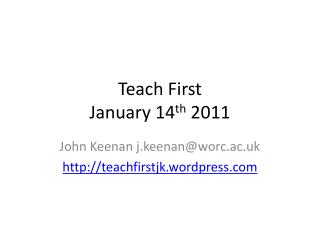 The Provider Gateway Self-teach tutorial Introduction - . july 2007 version 5.0. the lsc in association with ofsted and

Lecture 5,6, January 19, 2011 Bonding in NeFONCBBe hydrides - . nature of the chemical bond with applications to

Soft Skills: We Know Our Students Need Them, But How Do We Teach Them? - . trish bobst national education consultant

ECE Question of the Day - . thursday, january 10. what are the minimum standards of licensing?. friday, january 11. why