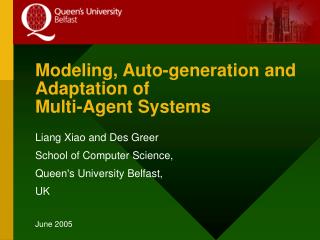 On the Role of Interactive Epistemology in Multiagent Planning - . artificial intelligence and pattern recognition

Software Self-Adaptation - . a survey of the field “self-adaptive software evaluates its own behavior and changes

THE DEPARTMENT OF ELECTRICAL AND COMPUTER ENGINEERING - . outline: •  ece at a glance research clusters

Unified Modeling Language - . a language for specifying , constructing , visualizing and documenting the artifacts of a