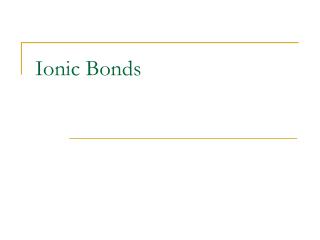 Ionic bonds and main group chemistry - . towards the noble gas configuration. noble gases are unreactive – they have

Ionic Bonds and Ionic Compounds - . 7.2. in many coastal countries that have warm, relatively dry climates, salt is

Ionic Bonds - . building science champions. objectives. explain the differences between an atom and an ion. describe how

Ionic Bonds - . how ions form. ion – atom or group of atoms that has an electric charge ionic bonds form when atoms

Ionic Bonds and Ions - . chemical bonding. a chemical bond is the force of attraction that holds two atoms together as a

Ionic Bonds - . chapter 8 chemistry mr. gilbertson. chemical bond. may form by the attraction between the positive

ARTHROGRAMS RT 255 - . radiography of a joint space or it’s surrounding structures with injection of contrast media.