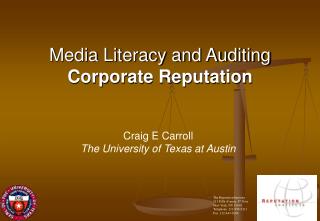 Media Literacy and Auditing Corporate Reputation. Craig E Carroll The University of Texas at Austin. What is corporate reputation?. A Workable Definition. Corporate reputation refers to what the public perceives is salient about the firm or its characteristics (Fombrun, 1996).

Security Awareness Training - . a threat awareness briefing. a defensive security briefing. an overview of the security

Corporate Social Responsibility - . role of npo- new professional opportunities with regard to csr obligation under

Managing in a Changing Global Environment - . chapter 3. environment. forces surrounding an organization that have

Barriers to strengthening the Global Reporting Initiative (GRI) Framework: an exploration of the perceptions of consult