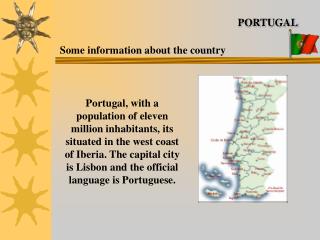 PORTUGAL. Some information about the country. Portugal, with a population of eleven million inhabitants, its situated in the west coast of Iberia. The capital city is Lisbon and the official language is Portuguese. PORTUGAL.