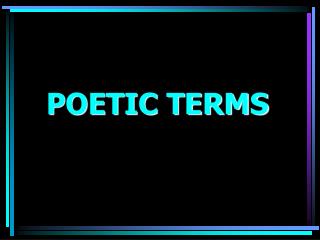 POETIC TERMS. ALLUSION. A reference to a historical figure, place, or event . ALLUSION. The teams competed in a David and Goliath struggle . ANALOGY. A broad comparison between two basically different things that have some points in common. ANALOGY.

What is poetry? - . it means many things to many people. “its the spontaneous overflow of powerful feelings.”

What is poetry? - . it means many things to many people. “its the spontaneous overflow of powerful feelings.”

Introduction to Poetry - . adapted by mr. griffin. poetic expression is hard to define and even harder to label since in

Revolution in Poetic Language - . by julia kristeva. outline. i. introduction ii. the semiotic and the symbolic 2. the