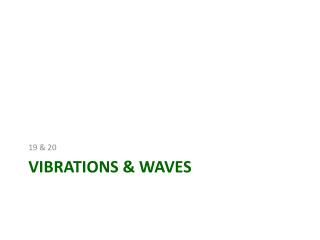 19 & 20. Vibrations & Waves. Sound in a Vacuum. Sound is the propagation of vibrations through a material medium—a solid, liquid, or gas. If there is no medium to vibrate, then no sound is possible. Sound cannot travel in a vacuum. Vibrations and Waves. Oar in Water Wings of a Bee

Vibrations and Waves - . the basis of sound and light. pendulum. back and forth motion of pendulum called simple harmonic