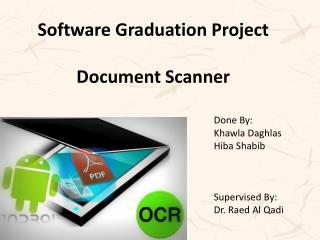 U of T Engineering and DocuShare - . the journey so far. summary. background facts and figures u of t context

CMPE-401 Graduation Project - . why is it a compulsory course?. students should learn how to conduct independent research

Moving from Paper to Less Paper (but not Paperless): - Implementing an electronic document and records management

IRHS 2017 Graduation Trip to. . . Iceland - Trip planned by iceland explorer go out with a bang!. by amanda johnson

Culminating Project - . senior presentation your name. my personal story. what should the panel know about you as a

Project Management Introduction - . what is pmi?. founded in 1969, the project management institute (pmi) has grown to be