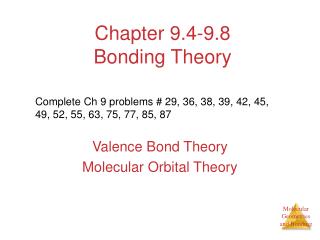 Bonding Theory - Demo. turn to p. 77 in textbook and follow along.. bonding. recall: all atoms want to have a stable

Bonding Theory II - . bonds innnnn spaaaaaaace! the behavior of molecules is based on the structure of its bonding.

Simple Bonding Theory - . review of lewis structures and vsepr theory. resonance. some molecules may have more than one

Bonding Theory I - . chemical bond: an interaction among electrons that results in an attraction between two or more

9.8 - Fk series. fk series is a compact and neat design for small items and fast transportation. it is also used for twin

Chapter 9.3 and 9.4 - . rotations and compositions of transformations. rotations. a rotation is a turn that moves every