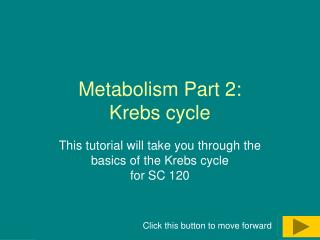 Metabolism Part 2: Krebs cycle. This tutorial will take you through the basics of the Krebs cycle for SC 120. Click this button to move forward . What was the first stage of metabolism?. Anabolism. Sorry – anabolism is when your cell builds large molecules like proteins. Introduction to Metabolism - . metabolism. the sum of the chemical changes that convert nutrients into energy and the

Lipid metabolism - . you give me fever peggy lee . fatty acid oxidation β -oxidation is the pathway by which the fatty