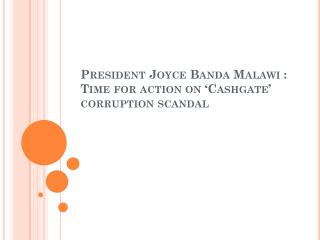 Malawi: Time for action on ‘Cashgate’ corruption scandal There is a real fear in Malawi that when Parliament is dissolved on 20 March ahead of elections slated for 20 May, the senior members of the network responsible for one of the country’s biggest corruption scandals, dubbed ‘Cashgate’, will escape justice.President Joyce Banda says. Many believe the election period will stall legal proceedings and could allow individuals – both senior officials and lower level civil servants involved in the scandal – to escape the reach of the law, while others may be shielded by parliamentary immunity if they or their party succeed in winning seats in parliament. "Civil society groups in Malawi are calling on the government to walk the talk in the fight against corruption, particularly since the release of the forensic audit report the ‘Cashgate’ scandal on 21 February. The report was commissioned by the Malawi government and funded by the UK government, which gave Malawi £117 million in 2012. The report focused on the facts of the case and did not identify any individual suspects. There should be no impunity for those involved in stealing from the state. The money should be used to help reduce poverty in Malawi and to raise living standards for all citizens.” The British High Commissioner to Malawi, Michael Nevin, insisted that naming people in the report could compromise ongoing court cases, a position challenged by civil society groups and the Public Accounts Committee (PAC) of Parliament. The scandal involves an estimated US$20 million to US$100 million that has gone missing from government coffers. It became news last year immediately after Malawi’s budget director was shot under circumstances that still remain a mystery, and huge sums of cash in both local and foreign currency were found in the vehicles and homes of some civil servants, most of them low-ranking junior accountants according to President Joyce Banda. Foreign development donors pulled the plug on U

THE PRESIDENT - . warm – up – what is the most important role of the president of the united states? . wymk 1. what

Is It Time for a Captive Insurance Company Audit? - . is it time to change your art strategy? june 2008. michael