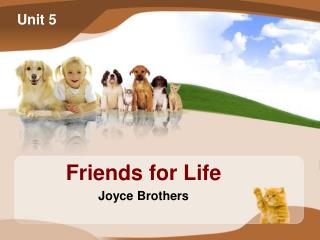 James Joyce (1882-1941) - . born in dublin to an impoverished family educated by the jesuits left ireland for medical

I am because we are and therefore we are because I am. (Asante Proverb) - . black psychology. what shall we say?. black

MY FRIENDS - . by: samuel binu class-v kv-tvr. my friends name are sanjay,venkat and gururam. we are best friends. we

A Visit to Friends - . some things to consider…. integrates the personal and the professional podogorin sheds his

U r Speaking – God is listening…so r others - . the influence of what we say and how we say it – james

How Are You Smart? - . multiple intelligences in the classroom. it is not - - how smart are you?. stanford binet iq

Will You be my Friend? Facebook Friends Vs Real Friends - . do people really do this?. survey by universal mccann in