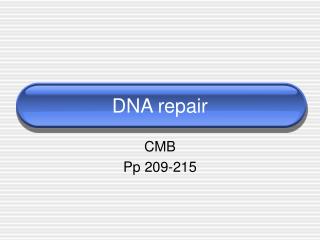 DNA repair. CMB Pp 209-215. DNA repair. Damaged DNA must be repaired If the damage is passed on to subsequent generations, then we use the evolutionary term - mutation . It must take place in the germ cells - the gametes - eggs and sperm

DNA Damage and Repair - . why do we care? genetic diseases cancer. cellular responses to dna damage. reversal of dna

DNA Repair - . dr derakhshandeh. for dna. information must be transmitted intact to daughter cells. accuracy is

DNA Repair DNA repair is a system used to correct DNA damage caused by either: - A- errors during dna replication

Chapter 12 Molecular Mechanisms of Mutation and DNA Repair - . mutations . a mutation is any heritable change in the

DNA REPAIR - . dna is the only biological molecule that is repaired dna damage alteration to the chemical structure of

DNA Repair - . dr derakhshandeh. for dna. information must be transmitted intact to daughter cells. accuracy is

Chapter 9 The Mutability and Repair of DNA - . outline:. 1.replication errors and their repair 2. dna damage 3.repair of

DNA damage and repair - . • types of damage •direct reversal of damage •excision repair in prokaryotes and

DNA Repair and Mutations - . chemical reactions and some physical processes constantly damage genomic dna at the

DNA Repair &amp; Recombination - . all 3 genomes in plants constantly being damaged by uv and other forms of