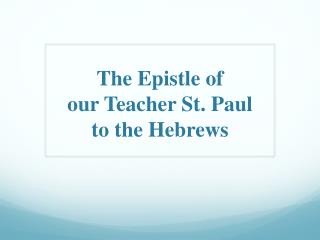 The Epistle o f our Teacher St. Paul to t he Hebrews The Epistle o f our Teacher St. Paul to t he Hebrews

Teacher Effectiveness - . chapter 11. are teachers born or made?. the best of the best . sketch the best teacher you ever

A “Bad Teacher&quot; Confesses - . i give a lot of credit to new york city special education teacher william

The Word Is Alive The Epistle of Jude - . narrated by tony gillon. author and title. the letter was written by jude, who

The Epistle to the Galatians “Freedom in Christ” - . book of galatians in the new testament. time period in nt

New Testament Survey: The Book of Hebrews - . “looking unto jesus, the author and finisher of our faith, who for the