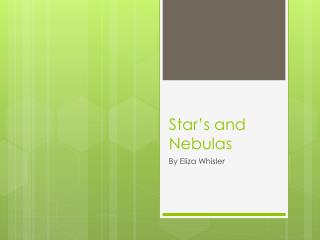 Star’s and Nebulas. By Eliza Whisler. What is Star?. A star is a ball of gas in space that is really hot. The star is a sun, because the sun is a star. A nebula is a ball of gases and dust that star’s form from. Star’s life.

Chapter 14 Our Sun: The Closest Star - . the material of chapter 14 introduces the sun, the closest example of a star and

THE STAR OF BETHLEHEM “THE STAR THAT ASTONISHED THE WORLD!” AND - Christ-mass, what is it really all about? edited

Chapter 12 Stellar Evolution - . units of chapter 12. leaving the main sequence evolution of a sun-like star the death of