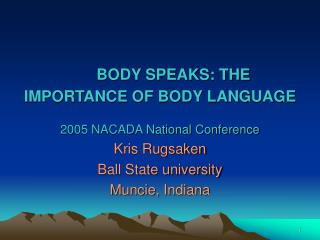 Body Language… the good, the bad, and the give aways… Submitted by Kerri Campbell University of the Incarnate Word

Body Language Basics - . module one: getting started. the human body is the best picture of the human soul. ludwig

Gestures - . the importance of body language. research has shown that a significant amount of what we are saying does not

BODY LANGUAGE - . w ire sculptures m s. ibarra. the body. questions we will explore what ways can we use our bodies to

Language of Anatomy - . anatomical position. positions of areas are determined relative to the standard anatomical

Sign Language - . by: brady hennig edfx 200. sign language. what is it? it is a language that uses manual communication

ORGANIZATION OF THE BODY - . objective. to name body system and functions identify body cavities list the divisions of