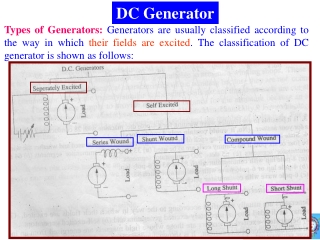 DC Generator. Types of Generators: Generators are usually classified according to the way in which their fields are excited . The classification of DC generator is shown as follows:. Fig. 26.41. Equivalent Circuit of separately-excited generator. Generators may be divided into: