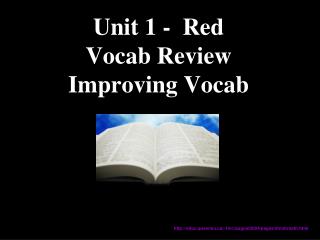 Vocab List 1 Definitions - . appraisal (noun) : an estimate of the quality or value of something 2. scheme (verb): to

Poetry Vocabulary - . what is poetry?. poetry is one of the three major types of literature, the others being prose and

Chapter 2 Vocabulary Quiz Words - . directions: copy the following vocabulary words. they will be on your ch 2 vocabulary

HW: Read 20+ min. (Study for vocab retakes) - Key q: how can i explain and analyze the effects of sound, form, figurative

English 3 Unit F1 Vocabulary - . read and follow these directions, but delete them before submitting this assignment:

Vocabulary Collectors - Welcome! this slide presentation will teach you how to successfully create a showing sentence