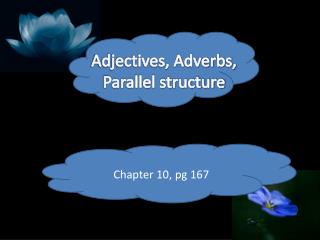 Grammar Review: Parallelism - . monday, nov. 28 th. what is parallelism?. when two or more equal ideas are expressed in

4 basic sentence structures - . variety in structure &amp; length. why use variety in your sentences?. sentence

Clauses - . identifying adjective, adverb, and noun clauses in a sentence. phrase vs. clause. a clause is a group of

Verbs and Adverbs - . verbs. definition: a word that expresses an action or helps to make a statement. verb tenses and

Parallel Structure - . is all about writing balanced sentences. basically, when you are writing about two or more related

Adjectives and Adverbs - . chapter 5. lesson 1: what are adjectives?. adjective – a word that modifies (describes) a