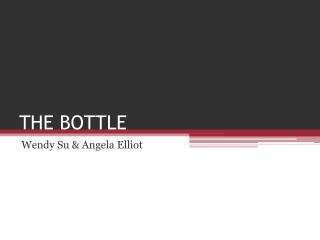 The Bottle Imp - . vocabulary. imp--a small, mischievous devil toilet-- the process of washing oneself, dressing, and

The Better Bottle - . by micah watney. introduction. have you ever been shopping and passed by a variety of different

Battling the Bottle - . by: cain buckler sfsu. our goal: to phase out the sale and dispersal of plastic water bottles on

The Big Bottle - . energy in a bottle. contents. how it works materials where would we put our device? maintenance what

The Message &amp; the Bottle - . ted lefroy. some personal observations. the reflective organisation the marriage of

The Bottle Boat Initiative - . organized and executed by the bottleboatboys (prashanth, constantine, and vincent) . the

The Mystery Bottle II - . this time is personal. objectives. physics 2 the student will investigate and understand

WHAT’S IN THE BOTTLE? - . an inquiry lab. do now. get out lab sheets and logbook. goal. t o determine the type of

Message in the bottle - . art lab-the sea icelandic meeting 28.may-2.june 2013. the idea . in comenius-week we decided

Bottle Glorifier - Michelob amberbock is a smooth, rich dark lager which has enjoyed solid growth over the past 9 years.