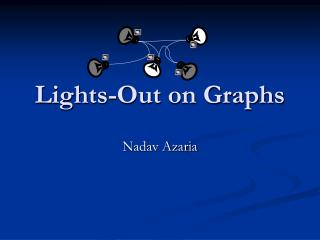 Lights-Out on Graphs. Nadav Azaria. What is “ Lights-Out ” ?. “ Lights-Out ” is a hand-held electronic game by Tiger electronics. It is played on a 5 ‰ 5 keypad of lightable buttons. Other versions of the game exist. On Start: Some random buttons are lit. Object:

Chapter 1 Functions and Graphs - . quick talk. what can you tell me about functions based on your peers’ lessons? what

Graphs and Networks with Bioconductor - . wolfgang huber embl/ebi bioconductor conference 2005 based on chapters from

Starting and growing transplants under lights - Curtis swift, ph.d. colorado state university extension what it is?