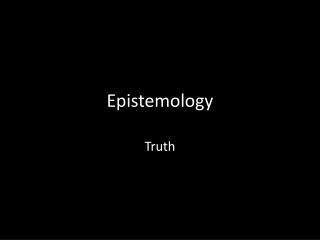 Epistemology. Truth. The Truth?. Truth. Philosophers have debated the nature, origin and definition of truth for centuries. Can be considered both a metaphysical and epistemological issue. Question: Do you feel there is such a thing as absolute truth?. Seeking the truth.

Theory - . a statement about the relationships between variables that is used to explain, predict, and control events.

Threads - . by: kelsey dockery. john dewey 1859-1952. dewey career was focused on epistemology or the ‘theory of

What is philosophy? - . inventory of some philosophical topics: 1. epistemology 2. metaphysics 3. value theory 4. logic.