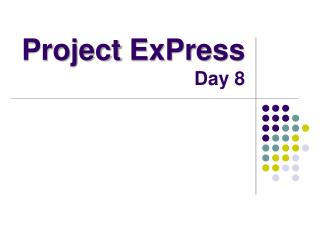 An Introduction to EXPRESS - . marvin wp1 meeting, hamburg - april, 1999, u. rabien based on a tutorial given by m. grau,

5 Ways to Express your Feeling on Valentine's Day - The write talks about the various ways in which you can propose her.

Express Bags - Express is a brand of indian company silvertouch. in the business since 1998, express has been able to