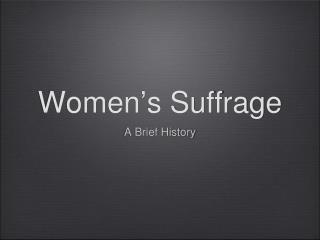 DO NOW - . why do you think women won the right to vote in 1920, after earlier efforts had failed? look in your notes and

Reproductive Health Care for Women With Disabilities - . objectives. to identify the characteristics of the population of

A Brief History of Women in America - . deborah hoeflinger. property-owning new jersey women could vote from 1776 to

Voting in America - . the right to vote. history of voting rights. the framers of the constitution purposely left the