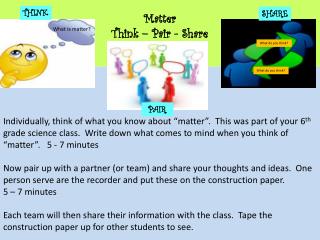 Think-Pair-Share : - How are common fractions, decimals, percents , and ratios alike? how are they different?. ratios

Everything in the world is made of matter . Matter is anything that has mass (weight) and occupies space. - Everything in

Matter - . chapter 2. definition . matter is anything that has mass and takes up space. mass is a measure of the amount

WELCOME TO THE Alabama New Principal Mentoring Program - . a workshop for district liaisons. think-pair-share. take a