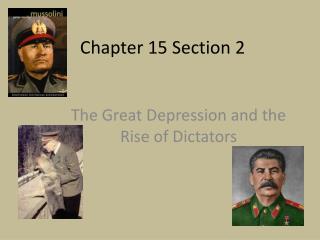 Chapter 15 Section 2. The Great Depression and the Rise of Dictators. Fascism . To put the needs of a nation above the needs of an individual. . Dictator. Absolute or total ruler A country ruled by a dictator is called a dictatorship. http://www.planetrulers.com/current-dictators/.

Ch. 15 Sec. 2 - . ideas that shaped darwin's thinking. radical views most people believed the earth was only a few

Chapter 15 Section 2 - . people on the move. pogrom. violent massacres of jews sweeping through russia. how did pogroms

A Worldwide Depression (Ch. 15, Sec.2) - . problems in postwar europe. most major european countries were bankrupt after

Chapter 15: Toward Civil War Section 2: A Nation Dividing - . essential question : how did popular sovereignty lead to

Chapter 15 Section 2 - Properties of matter. chapter 15 section 2. look but don’t touch!. a physical property is any