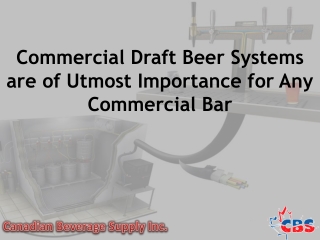 Commercial Draft Beer Systems are of Utmost Importance for A Commercial draft beer systems are an integral part of any commercial establishment selling draft beer. You need to have one installed in your bar, if you wish to leverage the popularity this type of beer enjoys.

Commercial Draft Beer Systems are of Utmost Importance for A

Start Making Profit Using Fob Draft System - An fob draft system is made to keep your beer lines filled with brew only.

Importance Of Alcohol Beverage Control - While alcohol beverage control can be an excellent way to increase productivity,

Good Beer Atlanta GA - Are you looking for good beer with best taste in atlanta ga? scofflaw beer is a well known name in

Beer Basics - . beer and the civilization of man. brewing can be dated back to at least 7000 bc. many archeologists

Beer Advertisement - By: tim and steve . beer advertisement. learning objectives. students will be able to see how the