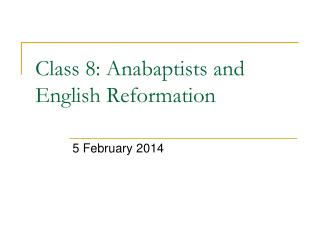 Protestant Reformation Introduction - . erasmus. christian humanist: christianity should be a guiding philosophy for

English Reformation Tour - . the following pictures are taken from our earlier tours and are shown in order of the

Intro to the Reformation - . thus, reform ation = changes in ways of teaching / practicing christianity (this was also

English 9 February 18 - . bell ringer: i was compelled to think about it, reading was just something that came to me.

The English Reformation - . reaction in england to the reformation. 1520s: martin luther and other reformers active in

Protestant Reformation - . the protestant reformation. by the early 1500s, concerns about catholic church turned into a

The (Protestant) Reformation - . what does reform mean? examples of present day reforms?. birth of protestantism. the