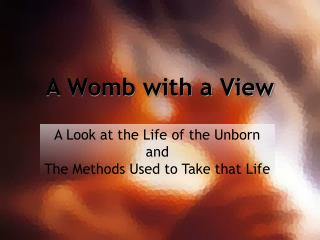 A Womb with a View A Look at the Life of the Unborn and The Methods Used to Take that Life This presentation takes a week-by-week, month-by-month look at the life of an unborn human. We also describe the methods used to abort the unborn during each “trimester.”

A Room with A View - . chpt 4: s ymbolism and narrative. sequence of events. structurally, the novel consists of a series

A Room With a View: - . creating the elizabeth city state university music library. stephanie lewin -lane. about me.

A Room With A View - . mock exam review 2012. essay question. in what ways does forster present the snobbery and

A Window to the Womb - . fetal development &amp; the development of sonography. before i formed you in the womb i

Ruminating With A View - . talking to myself by carol mcleod. how able will i be in five years?. i’m thinking about my

Room with a View Criteria - Objective: design a room for a client who loves to read. this client wants a room with the

A view - . basics of jelly filled cables and fault location in copper cable network, construction and maintenance of dp

Welcome to Detroit Shoreway A Neighborhood with a view, a community with a vision - . detroit shoreway community