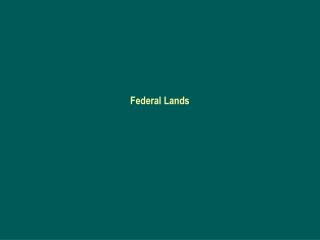 Public and Federal Lands - . i. regulation of federal lands. no nation has set aside as much of its land for public use,

Our Public and Federal Lands - . the big picture. 35% of us is public land 75% of that land is in alaska. logging,

Proposed Projects on Non-Federal Lands - The extent of blm responsibility over actions occurring on non-federal lands:

Public Lands - . lands owned by governments they are not accidents of history they reflect the decisions we,

Palestinian Lands : - . understanding the physical environment of the wadi el-far’a as a means for assessing