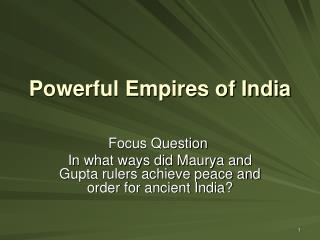 Powerful Empires of India. Focus Question  In what ways did Maurya and Gupta rulers achieve peace and order for ancient India?.

Powerful Empires of India - . central questions. what were the main characteristics of the indus civilization? how did

4-2 Powerful Empires of India - . looking ahead: gupta india declined under the pressure of weak rulers, civil war and

Powerful Muslim Empires - . islamic invasion. after the gupta empire fell in 550, india was divided into many little

Empires of India - . early empires. by 512 bc, the persians had pushed their empire east to the indus river valley the

Empires of China &amp; India - . where did we last leave china and india? what are the major religions in this

The Empires of Early India - . the mauryan empire. the reign of chandragupta. rise to power chandragupta gathers an

EMPIRES IN INDIA - . maurya dynasty location : ganges valley and the deccan; capital was pataliputra which had libraries,

India ’ s Empires - . a brief history (sequenced notes on a timeline would be a good strategy). geography: where would

Empires of China and India - . the fall of the zhou dynasty. eventually, zhou rulers began to decline. the zhou

Chapter 4.4: Empires of Ancient India - . objectives. learn about the rise of the maurya empire. study asoka’s