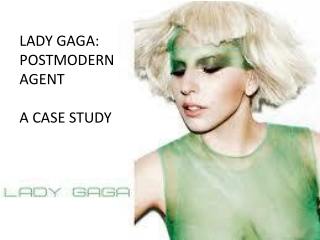 LADY GAGA: POSTMODERN AGENT A CASE STUDY. LEARNING OUTCOMES. To discuss Lady Gaga as a postmodern ‘agent’ of feminist pastiche To explore and challenge the notion of fixed gender categories To recap the theories of Laura Mulvey and Janice Winship. THE FACTS.