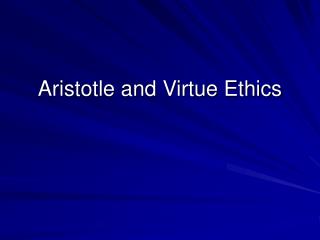 Aristotle and Virtue Ethics. Everything aims at some end—has some purpose Ethics requires that we discover what the purpose or end of human life is. There are lots of things that people pursue, but most of these are pursued for the sake of something else.

VIRTUE ETHICS - . from aristotle to the 21 st century. why should i be moral? because of my character!. aretology. arete

Aristotle – Virtue Ethics - . starter – reminder of the doctrine of the mean, vice, virtues and deficiencies ext –

Ch. 9 – the Ethics of Character: Virtues and Vices - . aristotle and our contemporaries. introduction. concern for

Virtue Ethics - . jane comes to cheer you up in the hospital in order to fulfill her sense of duty to the notion of

VIRTUE ETHICS - . aristotle (384-322 b.c.). virtue. a state of character or habit which is the result of dispositions and