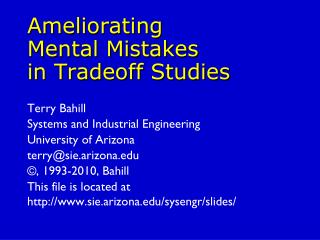 Ameliorating Mental Mistakes in Tradeoff Studies. Terry Bahill Systems and Industrial Engineering University of Arizona terry@sie.arizona.edu ©, 1993-2010, Bahill This file is located at http://www.sie.arizona.edu/sysengr/slides/. Acknowledgement. This research was supported by

Startup Mistakes - Know the top 6 start-up mistakes : because one small mistake can change everything 1) building

Visual- People Walking - According to the national institute of mental health, one in four adults—approximately 57.7

According to the national institute of mental health, One in four adults—approximately 57.7 million Americans—

A Positive Mental Attitude - . a positive mental attitude is the real foundation for optimal health. your attitude can

MENTAL TOUGHNESS - . © aqr ltd july 2004. mental toughness -about the presentation. no need to take notes there is an