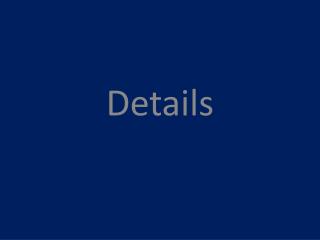 Details. Diction. Word choice Words create tone and meaning Conveys the writer’s attitude Denotation-literal (dictionary) meaning Connotation-figurative or emotional meaning. Art is the antidote that can call us back from the edge of numbness, restoring the ability to feel for another. Details - . at this point our heap can easily implement a priority queue given that we start with an empty queue and add

Details - Anyone need a syllabus? anyone need to sign roster? syllabus as is: tues. oct. 26: landscapes thurs. oct. 28:

details… - . details…. where i have words in blue it is supposed to indicate a hyperlink. this is cnn. 1. 1. this is