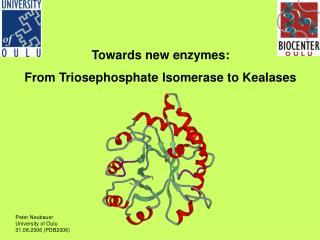 Towards new enzymes: From Triosephosphate Isomerase to Kealases

Towards new enzymes: From Triosephosphate Isomerase to Kealases. Peter Neubauer University of Oulu 31.08.2006 (PDB2006). Introduction. Enzyme of the glycolysis pathway W ild type enzyme is a dimer that consists of two identical (  )8-fold subunits with the size of 250 residues

Towards new enzymes: From Triosephosphate Isomerase to Kealases

General Features of Enzymes - . most biological reactions are catalyzed by enzymes most enzymes are proteins highly Enzymes - . what are enzymes?. most enzymes are proteins ( tertiary and quaternary structures) act as catalyst to

Enzymes - . enzymes, substrates and active sites. enzymes are globular proteins that work as catalysts substrates are the

Enzymes - . objective 2.01 functions of enzymes how enzymes work. enzymes…. a type of protein responsible for speeding

Enzymes - . background – enzymes. enzymes are compounds that facilitate chemical reactions . these compounds are

Enzymes - . characteristics. all enzymes are proteins catalysts – i.e. control the rate of a chemical reaction. how

Good Times With Enzymes - . a dr. production www.africangreyparrott.com sung to the tune “goodtimes” by chic.

Enzymes Dr.Saba Abdi Assistant Professor Dept. Of Biochemistry - 2. what are enzymes?. most enzymes are proteins

Enzymes - 16 th october. enzymes. learning objective : to examine what enzymes are and describe how they work. what are