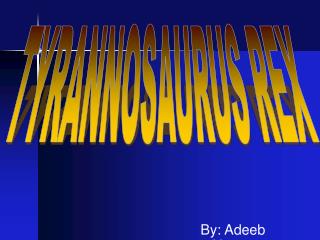 All about Dinosaurs - Jaliyah. all about dinosaurs. velociraptor. velociraptor was about 5 to 6 feet long (1.5-2 m), and

Tyrannosaurus Rex - . madeline phelps. table of contents. do they stay with their baby or leave them? pg3 how long will a

T-Rex escapes - . t-rex escapes in new york. t-rex has a powerful bite. this is at-rex’s tooth. its realy powerful.

Dinosaurs Before Dark - . what is a dinosaur ?. dinosaurs are reptiles that lived millions of years ago. when did

T-Rex - . by taehun kim. t-rex(basic facts). t-rex is a fearsome meat eater known as the king of dinosaurs. there are two

TYRANNOSAURUS REX - . born and raised. when born they are at least five pounds and are about 10 inches tall. live to be

Dinosaurs - . by rammeja and simran. tarbosaurus. how do i pronounce tarbosaurus? tar-bow-sore-use what does the name

Move Over, T-Rex! I’m the King of Dinosaurs now!!! - . a dinosaur webquest for kindergarten designed by eunice cupples

My Dinosaur/Prehistoric Animals is a Tyrannosaurus Rex - . by jamie draper. habitats. my dinosaur lives on land. not in