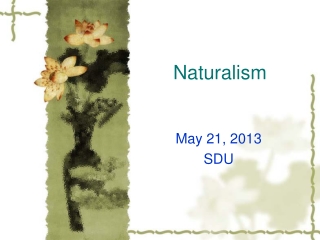 Naturalism. May 21, 2013 SDU. 'Naturalism in literature was a literary movement, that began in the late nineteenth century (1865-1900) in film, art, literature and theater that portrays common values of an ordinary individual.' Naturalism - . modern literary movement of the 1890s attempted to revolutionize literature by aligning the arts with the

Naturalism - . each picture requires a special composition and every artist treats each picture originally. – peter

Digging the Fourth Grave For Naturalism – No “Dark Energy” - . christopher chui, phd acknowledgment: i am indebted